Miriam T. Rooney was an American Catholic original. She often asserted she was born on the Fourth of July in Charlestown, but was more reticent about the exact year of her birth. She graduated from Girls' Latin High School in Boston and went to work as a librarian at the Boston Public Library in 1924. Between 1926 and 1928, she completed a substantial portion of her undergraduate work through the Harvard University Extension College.

In 1928 she moved to Washington to become a librarian at the Department of State. While working there, she went to school at night, earning a B.A. from Catholic University in 1930, a M.A. in 1932 and Ph.D. in philosophy in 1937. Her Ph.D. dissertation was a Thomistic natural law critique of the legal philosophies of Bentham, Maine and Holmes; she entered George Washington Law School in 1938, received her LL.B. in 1942, and became a lawyer at the Department of State as assistant to the legal advisor.

She taught as an adjunct at Columbus Law School while she worked at the State Department until 1948, when she joined the faculty at Catholic University’s law school as professor and head law librarian. Two and half years later, she headed her own law school – the newly established Seton Hall University School of Law. The school opened at 40 Journal Square in Jersey City and soon thereafter moved to 40 Clinton Street in Newark.

Dean Rooney employed her considerable talents over the next decade to advance her vision of a Catholic law school and to obtain accreditation for Seton Hall Law in very short order. Seton Hall Law was fully accredited by the ABA in 1955 and was admitted to membership in the Association of American Law Schools in 1960. Dean Rooney was succeeded as dean by John P. Loftus in the summer of 1961, but remained on the faculty until her retirement in 1970. She also was a Fulbright Fellow and served as an advisor to the Vatican Delegation to the United Nations. She died March 23, 1981.

Elizabeth Defeis joined the Seton Hall Law faculty in 1971 and came to the law school with an impressive resume that combined a stellar academic background with experience in both the public and private sectors. She had, for example, been selected for the Honors Program at the United States Department of Justice, and served as an Assistant United States Attorney for the Southern District of New York. She had practiced law at a prestigious Wall Street firm and also, as a Reginald Heber Smith fellow, at Legal Services in the Bedford-Stuyvesant section of Brooklyn – a time when Brooklyn did not carry the cachet now associated with it.

Prior to Dean Defeis coming to Seton Hall Law, the faculty for many years was exclusively male – this despite the fact that the first dean was the trail-blazing Miriam Theresa Rooney. Dean Defeis taught courses in a number of areas but gradually concentrated her work around her primary interests, international and constitutional law. Her international focus led to her collaboration with another faculty member, Harvey Sklaw, to found a summer program for law students in conjunction with the University of Parma law school. The program was very successful and ran for a number of years, offering courses taught by faculty of both law schools.

In 1983, Dean Defeis was named as the fifth dean of Seton Hall Law and she served in that capacity for five years. She was very active in national legal education circles and her efforts greatly contributed to the spread of Seton Hall Law’s reputation across the country. At the end of her deanship, she rejoined the faculty and served for many years as a Distinguished Scholar.

Kathleen Boozang has been a professor at Seton Hall Law since 1990 and Dean since 2015. She currently teaches and writes on issues related to Catholic healthcare and corporate compliance in the health and global life sciences industries. Dean Boozang has served in multiple administrative capacities during her tenure, including Associate Dean for Academic Affairs and Vice Provost. She founded the Law School’s now top-ranked Center for Health & Pharmaceutical Law & Policy, and established the Law School’s graduate degrees, its Division of Online Learning and its Global Life Sciences Compliance Training Programs.

Dean Boozang is a Fellow of The Hastings Center, an independent nonprofit bioethics research institute, as well as a Fellow of the American Bar Foundation, an honorary organization of legal practitioners. She is also a member of the American Law Institute and participates on the consultant groups for the Principles of Nonprofit Law and Corporate Compliance. She serves on the Editorial Board of the Journal of Health and Life Sciences Law and is a past editor-in-chief of the Journal of Law, Medicine & Ethics. She is past president of the American Society of Law, Medicine & Ethics (ASLME) and also previously sat on the Advisory Board of the Journal of Health Law. Dean Boozang served for many years on the Board of Directors of the American Health Lawyers Association (AHLA), and remains involved in many AHLA projects.

Throughout her legal career, Dean Boozang has been active in public service. She has served on numerous advisory boards and committees for healthcare providers including currently on the Board of Trustees of the St. Joseph Healthcare System. She also worked with New Jersey and New York, including serving as an advisor to the New Jersey Attorney General Task Force on Physician Compensation by Pharmaceutical Companies, which resulted in the promulgation of proposed regulation. She is a former member of the New York State Task Force on Life and the Law, an interdisciplinary commission with a mandate to develop public policy on bioethical issues.

In 2013, the ASLME conferred upon Dean Boozang the Jay Healy Health Law Teacher Award. She was named the Seton Hall University Woman of the Year in 2006 and the Washington University Law School’s Young Alum of the Year in 2004. She graduated from Washington University School of Law in 1984 where she was inducted into the Order of the Coif and served as the managing editor of Law Quarterly. She received her LL.M. from Yale Law School in 1990. 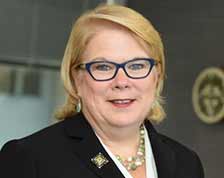 "I cannot imagine having had a more fulfilling career than preparing the next generations of Seton Hall Lawyers."