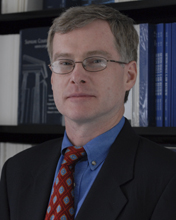 
Professor Edward A. Hartnett specializes in Constitutional Law and Federal Courts with a particular emphasis on the history and practice of the Supreme Court of the United States.

Professor Hartnett received his A.B., magna cum laude, from Harvard and his J.D. from New York University, where he was elected to the Order of the Coif and received the highest award given to J.D. candidates. He clerked for Judge Frederick B. Lacey and Judge Robert E. Cowen of the United States District Court for the District of New Jersey, and for Chief Judge John J. Gibbons of the United States Court of Appeals for the Third Circuit. After his clerkships, he practiced with the Federal Public Defender and the law firm of Robinson, St. John & Wayne. Since joining the law school in 1992, he has published articles in the areas of federal jurisdiction and constitutional law in journals including Constitutional Commentary, Columbia Law Review, Duke Law Journal, Michigan Law Review, New York University Law Review, Texas Law Review, and William & Mary Law Review. Professor Hartnett has also been a visiting professor at the University of Virginia School of Law and the University of Pennsylvania Law School. He was named the Richard J. Hughes Professor for Constitutional and Public Law and Service in 2004.

Taming Twombly: An Update After Matrixx, 75 Law and Contemporary Problems 37 (2012)

The Standing of the United States: How Criminal Prosecutions Show That Standing Doctrine Is Looking for Answers in All the Wrong Places, 97 Mich. L. Rev. 2239 (1999)

Why is the Supreme Court of the United States Protecting State Judges from Popular Democracy?, 75 Texas L. Rev. 907 (1997)

Report to the Standing Committee on the Federal Judiciary of the American Bar Association Evaluating the Writings of Judge Merrick B. Garland, Nominee to the Supreme Court of the United States (2016)

A "Uniform and Entire" Constitution; or What if Madison Had Won?, 15 Constitutional Commentary 251 (1998)

To Dismiss or Not to Dismiss: Can a State Prisoner’s First Federal Court Petition for a Writ of Habeas Corpus Be Dismissed as Abusive?, (1995-96)

Do Federal Courts Have to Follow the Commentary to the Sentencing Guidelines?, 1992-93 Preview of United States Supreme Court Cases 309 (March 19, 1993)