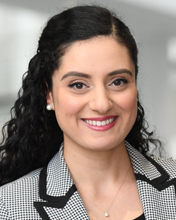 
Iman Saad is the Practitioner in Residence for the Immigrants’ Rights/International Human Rights Clinic at the Center for Social Justice. Iman leads Seton Hall Law’s newly launched detention project as part of a state-funded Detention and Deportation Defense Initiative, which provides pro bono legal representation to immigrants detained in Newark and the surrounding areas in cases before the Immigration Courts. Prior to joining the Center for Social Justice, Iman was selected for the Department of Justice Honors Program to serve as an Attorney Advisor with the Executive Office for Immigration Review. During her time in the Executive Office for Immigration Review, Iman obtained substantial experience with immigration matters as a result of her work at the Newark and Elizabeth Immigration Courts.

During her time as a Center for Social Justice Scholar, Iman participated in the Immigrants’ Rights/International Human Rights Clinic, where she assisted a Sudanese refugee facing political and gender persecution obtain asylum in the United States. Additionally, Iman participated in the Equal Justice Clinic and assisted in defending a Freedom of Information Act request regarding government contracts for immigration detention centers before the United States Court of Appeals for the Second Circuit. Prior to serving as a Center for Social Justice Scholar, Iman gained valuable experience at American Friends Service Committee as a legal intern, and as an intern for the United Nations High Commissioner for Refugees in Beirut, Lebanon.

Iman received her Bachelor of Arts, majoring in Political Science and Journalism, from The College of New Jersey.