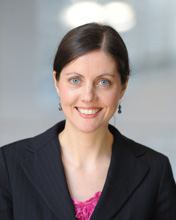 
Jenny-Brooke Condon is a Professor of Law who teaches Constitutional Law and directs the Equal Justice Clinic. The clinic works to advance the civil and constitutional rights of people subjected to inhumanity and injustice in the immigration and criminal legal systems. In addition to representing individual clients seeking parole and those subject to supervision, Professor Condon and her students regularly file amicus briefs in state and federal court on issues ranging from policing, bail reform, prisons, parole, and extreme sentences. With co-counsel, the clinic has litigated challenges to discrimination against non-citizens denied access to public benefits, exposed private prison contracts through the Freedom of Information Act, and served as class counsel in a challenge to conditions at a county jail. Professor Condon has argued multiple times before the New Jersey Supreme Court—most recently in a successful challenge in 2021 to a rule denying unemployment benefits to people who lose their jobs due to baseless criminal charges.

Professor Condon’s scholarship focuses on constitutional issues arising in the criminal and immigration systems and is informed by her clients’ lived experiences. She has argued for reinvigorated equal protection and due process rights for non-citizens and critiqued judicial regulation of the death penalty. Her current project contends that the largely hidden crisis of sexual violence experienced by women who are incarcerated is insufficiently conceptualized and addressed as gender subordination.

Prior to rejoining the Seton Hall Law School faculty in 2010, Professor Condon was a John J. Gibbons Fellow in Public Interest and Constitutional Law at Gibbons P.C. As a Fellow, Professor Condon co-counseled with the ACLU in Freedom of Information Act litigation compelling the disclosure of the Office of Legal Counsel's so-called "torture memos;" defended a municipal gun control ordinance on behalf of a local citizens group in the New Jersey Supreme Court and worked on cases involving post 9-11 torture, marriage equality, police misconduct, and capital punishment.