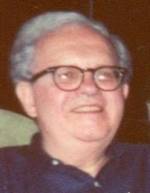 
Joseph M. Lynch, a longtime Princeton resident, died on February 3, 2018 at age 93 in his home at Morris Hall Meadows in Lawrenceville, N.J. after a long career as an attorney, law professor and legal historian.

Joe was born on Aug. 28, 1924 in Jersey City, N.J., the son of Joseph Lynch and Elizabeth Coughlin. He spent his childhood in Jersey City, where he attended the St. Nicholas School and St. Peter’s Preparatory School and spent his spare time reading, playing baseball and going to movies. In 1942, he enrolled in St. Peter’s College in Jersey City, but early the following year enlisted in the United States Army. He was assigned to the Signal Corps in Sea Girt, N.J., where he was taught to operate the Army’s message encoding machine. However, the Army decided that Joe should be assigned to decipher German messages instead of encoding our own, and he was shipped off to England to serve in a Army detachment assisting the British in the Ultra project (also known as Enigma).

Joe's duty post outside London exposed him to successive stages of German aerial attacks: incendiary bombing, V-1 buzz bombs and V-2 rockets. But the location also provided ready access to London’s varied cultural attractions: museums, concerts at the Royal Albert Hall, and theater in the West End or the Old Vic Theater. In the waning months of World War II Joe’s unit was posted to Southern France, awaiting orders for a transfer to the Philippines that never occurred. Exposure to European culture was a revelation for Joe. He often described his wartime experience as his real college education.

After the war, Joe returned to Jersey City and finished his undergraduate studies in English literature while working as a night reporter for The Jersey Journal. He graduated from St. Peter’s in 1948, and then – thanks to the G.I. Bill – attended Harvard Law School in Cambridge, Mass., from which he graduated in 1951. The following year Joe married Irene O’Neil, whom he had met while studying at Harvard. They were married for sixty-two years.

Joe practiced law in Hackensack before moving in 1957 to Princeton, where he spent much of the remainder of his life. During his early years in Princeton, Joe was strongly influenced by his friendship with the Catholic philosopher Jacques Maritain, professor emeritus at Princeton University, whom he met while attending daily mass. Maritain's views of ethics and justice had a lasting impact on Joe's conception of the role of law in society and government, which accelerated his decision to begin a career in teaching.

In 1961 Joe joined the faculty of the Seton Hall University School of Law, where he taught civil procedure and constitutional law until his retirement in 1993. He wrote extensively on the 20th century New Jersey Supreme Court’s expansion of its power to adopt rules governing practice and procedure in state courts. He also examined the early development of federal-state relations, where his research focused on Congressional debates concerning the correct interpretation of various provisions of the U.S. Constitution. Published in 1999 as Negotiating The Constitution, with editorial assistance from his wife Irene, this research concluded that the Founding Fathers’ “original intent” often was to use deliberately ambiguous language that aimed to advance the political interests of their home states while still ensuring the adoption of constitutional provisions that were potentially divisive politically. Alexander Hamilton fared better in this analysis than did James Madison.

In addition to his teaching and research, Joe also served as a charter trustee and counsel of the Stanley J. Seeger Hellenic Fund. In his role as trustee, he helped to organize the Stanley J. Seeger '52 Program in Hellenic Studies at Princeton University and for many years participated in the Seeger Fund’s annual meetings, which included cultural and historical tours of the Greek countryside.

Outside of work, Joe very much enjoyed travel (England, France and Italy were particular favorites), music, opera, theater, good food, the company of good friends, and relaxing in the summer in northern Vermont. He was an avid fan of the New York Mets and watched from the stands in Shea Stadium as they beat the Boston Red Sox in Game 7 of the 1986 World Series.

Joe was predeceased by his wife Irene and his brother John Lynch of Azusa, California. He is survived by his five children and their spouses: Anne Lynch and Peter Hadekel of Montreal; Peter Lynch of Franklin; Teresa Lynch of Blawenburg; Mark Lynch of Berwyn, Pennsylvania, and Patricia Lynch and Trevor Dickie of Cambridge, Mass. He also leaves his grandchildren, Kathleen, Christine and Tashi Hadekel, Valentine and Rudyard Lynch, and Nathaniel, Eliza and Rachel Dickie, as well as numerous nieces and nephews in California, Ohio, Massachusetts and Connecticut.