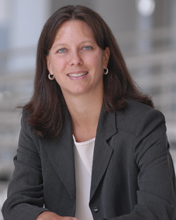 
Lori Outzs Borgen is the Director of the Center for Social Justice. She coordinates the Center’s clinics and its Pro Bono Service Program, as well as the Law School’s externship programs. Her research and practice interests are in the areas of housing, voting rights, and poverty law.

Professor Borgen currently teaches Social Justice Lawyering, Deposition Skills, and the Government and Non-Profit Externship course. She co-taught the Reentry Legal Assistance Clinic in 2018. The student cases focused on expungements, driver’s license restoration, and child support modifications. During the 2004-05 academic year, Professor Borgen directed the Housing and Homelessness Clinic. She supervised students in various housing and welfare matters, including landlord-tenant disputes and federal housing rights. She has also taught Persuasion and Advocacy and Interviewing and Counseling.

Professor Borgen has served on the NJSBA Pro Bono Committee for several years. In January 2020, she was appointed to serve as the Co-Chair of the committee. In June 2020, NJSBA President Kim Yonta appointed her to serve on the Access to Justice Committee of the NJSBA Coronavirus Task Force. From 2006-2018, she was a Trustee of Volunteer Lawyers for Justice, based in Newark, New Jersey, and served as Secretary of the Board for two years.

Professor Borgen has worked on housing and other public interest concerns throughout her career. She litigated landlord-tenant and other housing issues with Brooklyn Legal Services, Corp. B. She then served as a Gibbons Fellow in Public Interest and Constitutional Law at Gibbons P.C. (then known as Gibbons, Del Deo, Dolan, Griffinger and Vecchione, P.C.) in Newark, New Jersey, where she engaged in impact litigation on welfare reform, racial profiling by New Jersey police, domestic violence, and government-subsidized housing. While engaged in a full-time practice at Gibbons, she taught a course on low-income housing and community development at Seton Hall Law. After her Gibbons Fellowship concluded, Professor Borgen worked as the senior staff attorney with the Voting Rights Project of the Lawyers’ Committee for Civil Rights Under Law in Washington, D.C. She represented the NAACP and individual clients in litigation following the 2000 general election regarding problems that resulted in the denial of the right to vote in Florida for the presidential election. She also represented a class of ex-felons in Florida seeking to have their voting rights restored. In addition, Professor Borgen helped to establish the Election Protection coalition and participated in community education on voting rights and redistricting.

Professor Borgen received her J.D. from Columbia Law School and her B.A., with honors, from Harvard College. She clerked for the Honorable Joseph E. Irenas in the United States District Court for the District of New Jersey.