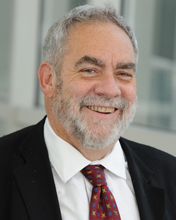 
Marc Poirier was a Professor of Law and the Martha Traylor Research Scholar at Seton Hall Law. He taught and wrote in the areas of property theory, environmental and natural resources management, cultural property, and law, gender, and sexuality. Though these issues appear wide-ranging, they share a common theme: they are all fundamental to everyday human flourishing, and they all require an ongoing balancing of individual uses in light of shared interests in or dependence on a resource.

For several years he taught a class for law students on-site in New Orleans on the BP Deepwater Horizon Blowout & Oil Spill. This course examined the legal issues surrounding the blowout and spill and its effects, including the multidistrict litigation now underway in federal court in New Orleans, putting these issues in the context of the culture and economy of South Louisiana as well as the world at large.

Professor Poirier’s scholarship brings insights from sociology, psychology, history, cultural theory, literary theory, and feminism to bear on contemporary legal issues. His recent article, The Cultural Property Claim within the Same-Sex Marriage Controversy, was a top ten download in the field of family law for more than a year, and won a Dukeminier Award as one of the best law review articles of 2008 in the field of law and sexual orientation. Professor Poirier has become a sought-after speaker on the topic of the legal recognition of same-sex couples. An earlier law review article analyzing the gender politics involved in Boy Scouts of America v. Dale (U.S. 2000) also won a Dukeminier Award, in 2003. In the environmental area, Professor Poirier was recently co-counsel on an amicus brief to the New Jersey Supreme Court on behalf of conservation interests, supporting a state law that protects hundreds of thousands of acres of pristine watershed land from urban sprawl. He has written about and advised environmental advocacy groups on the public trust doctrine and the scope of permissible regulatory takings. A recent article in the area of coastal land management argued that place-based public art has a unique role to play in the communication of the risk of sea level rise due to global warming. For several years Professor Poirier taught a survey course in environmental law to the U.S. Army Corps of Engineers. Professor Poirier has served on the boards of the Society of American Law Teachers, The Coastal Society, and Diamond Metta Lesbian and Gay Buddhists of New York. He recently joined the Steering Committee of a Contemplative Lawyers Group based in New York City. He anchors a meditation group that meets regularly at the Law School. He has been the Chair of two sections of the Association of American Law Schools, Property and Law and Interpretation. Professor Poirier also served for six years on his local Planning Board in South Orange, New Jersey.

Brazilian Regularization of Title in Light of the Right of Moradia, Compared to United States Understandings of Homelessness and Homeownership, 44 University of Miami Inter-American Law Review (2013)

Same-Sex Marriage, Identity Processes, and the Kulturkampf: Why Federalism is Not the Main Event, 17 Temple Political. & Civil Rights L. Rev. 387 (2008)

Environmental Justice and the Beach Access Movements of the 1970s in Connecticut and New Jersey: Stories of Property and Civil Rights, 28 Conn. L. Rev. 719 (1996)

Wetlands and Land Use, in Casebook on Zoning, Planning and Land Use Law in New Jersey, (David D. Furman) (1996)