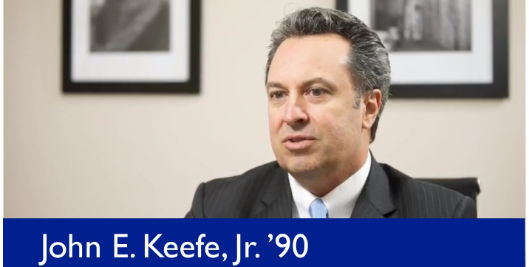 From New Jersey State Bar Association Community Net: For Incoming Leader of the NJSBA, 'lawyers helping lawyers' is Both Biography and Aspiration

For as long as he can remember, John E. Keefe Jr. has been surrounded by lawyers. The son of a judge, attorneys were part of the fabric of his upbringing years before he joined the profession.

“I fundamentally like lawyers. I find them funny, interesting people,” he said. “My dad’s friends were some of the most engaging people I had ever met.”

It is fitting, therefore, that this week, Keefe will take on leadership of the New Jersey State Bar Association, the state’s largest professional organization for attorneys. Keefe is to be sworn in during an installation ceremony held Thursday night during the NJSBA Annual Meeting and Convention in Atlantic City. The installation for new bar leadership will be, for the first time, open to all attendees.

“That notion of openness is really what I want to promote in this coming year,” Keefe said. “It’s reflective of who we are as a bar and who we are as a society. It’s not cronyism. This bar is for everyone.”

That openness is also reflective of who Keefe is, both personally and professionally, friends and family say.

“He’s always been a very affable person, since the time he was a kid,” said John Keefe Sr., a retired Appellate Division judge. He remembered his son running for president of his class in high school. “He won it because he gathered in groups that were outside the mainstream in his class. He brought them into the fold.”

“The thing that I love the most about the practice of law is I get to represent people from all walks of life,” he said. “The power of law can equal the playing field amongst everyone in society.”

PATH TO THE PROFESSION

He didn’t always see law in his professional future. “I wanted to teach English and history and coach baseball,” he said. But as he grew older, a career in the law became appealing.

That was not because of anything his father did directly. In fact, the judge worked so hard to not put pressure on his son to become a lawyer that at one point, Keefe wondered whether his dad thought he should enter the profession at all. It was an unnecessary concern. When Keefe announced he wanted to go to law school, his father was thrilled and confident that he would be successful.

“I was never told to be a lawyer…but all the ingredients were there,” Keefe said. “I felt that being a lawyer got my competitive juices going. It was me competing, most importantly, for something other than myself.”

He made involvement in the organized bar a priority from early on in his career, attending local county bar dinners and becoming active in state bar association committees. Along the way, he accumulated his own group of close lawyer friends. Among them is his friend for over 30 years, Thomas Scrivo, partner at O’Toole, Scrivo, Fernandez, Weiner, Van Lieu, who is former chief counsel to the governor.

“He’s someone I rely on for advice for counseling for the law, about life, about family…just about anything,” Scrivo said. “He does not take himself too seriously. He always laughs in every conversation, even in the toughest times.”

One of those particularly tough times unfolded last year, when Keefe learned he had throat cancer.

Keefe’s wife, Estee, and his three sons were crucial to him getting through that difficult year. He was lucky, he said, to have had an incredible support system – his father took over logistics at the firm, his colleagues, employees and friends stepped forward. And his many lawyer friends were also indispensable, driving him to and from the hospital, and sitting with him during long sessions of treatment.

The experience, he says, inspired one of his initiatives for his year as bar president – creating a safety net for solo and small-firm practitioners who make up the bulk of New Jersey’s private lawyers and who are especially vulnerable if their professional careers are abruptly interrupted by unexpected events.

That’s why he is working with the bar association to come up with a system that would allow the practices to continue to function in these times of trauma. A plan that lawyers could mobilize quickly to help colleagues.

The idea fits squarely with many of Keefe’s goals for his year as NJSBA president, which fall under the overarching theme of “lawyers helping lawyers.”

“Our constituency is lawyers. The state bar is here to serve the lawyers that make up our bar.”

Keefe is particularly interested, he said, in addressing the needs of new lawyers, who are the future of the profession. To that end, another priority of his year as president will be establishing a formal mentorship program that will connect attorneys new to the profession, or those who are in a state of transition, with more experienced attorneys who can guide them.

“I am extremely grateful for the mentors I’ve had in my career. I’ve been lucky. I hope that we as a state bar can provide mentorship for the newer lawyers through a real program that can match them with areas of practice and practitioners that they may not otherwise be exposed to,” Keefe said.

He is also dedicated to following through on two issues that the NJSBA has been advocating for some time: professional malpractice fairness and diversity initiatives.

“How do we approach diversity? We have to say what we mean, and mean what we say,” Keefe said. “I think we need to be inclusive of all ideas, and we need to really start listening to each other, and start making concrete differences.”

Professional malpractice fairness has been a major policy issue for the NJSBA, which supports legislation that would stabilize the cost of doing business for lawyers and other licensed professional by bringing the statute of limitations for filing a malpractice claim to two years, in line with doctors and other professionals in New Jersey and with lawyers in New York and Pennsylvania. “We need to level the playing field for lawyers,” Keefe said.

Keefe’s friends say he’ll make an excellent bar president because he is a problem solver who genuinely cares about the challenges other people face.

“I think he’ll do a really good job because he wants to do good things for people,” his father said.

For Keefe, the coming term has special significance in light of what he and his family have been through in the last several months.

“I think ‘service’ takes on a different meaning this year,” he said. “I look at it as even more important, as a payback – or a pay forward – for all the good things that have happened to me and all the people that have helped me.”