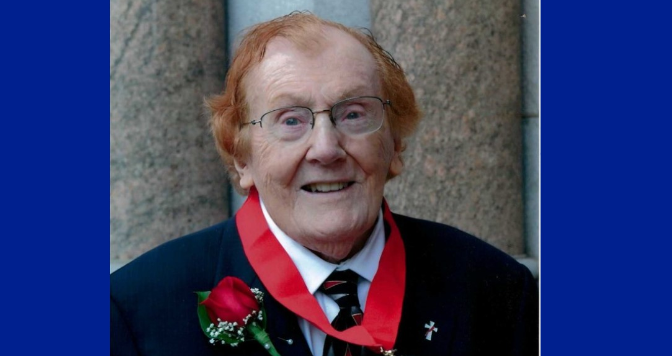 "Professor McQuade embodied what it meant to be a law professor at a Catholic law school.  We were blessed that he was so instrumental in Seton Hall Law’s formative years.  Frank also made his unique mark in New Jersey government. He was so proud of Seton Hall University, New Jersey, and his home town, as evidenced by his “Essex1” license plate! Always good-humored, he loved to engage about his many enthusiasms, most especially his wonderful wife Theresa. He is missed." - Dean Kathleen M. Boozang

Dr. McQuade was born in Harrisburg, PA and has lived in Maplewood for the past 58 years. Frank lived a very accomplished life, he was very active serving the church, several universities, the law and government. He has earned seven academic degrees, including a Doctorate in Philosophy from The Catholic University of America, and a doctorate in Law from Fordham University, an LL.M in Law from New York University and a Master of Arts in Theology from Seton Hall University. He was admitted to the practice of law in New York and New Jersey. Frank was ordained Deacon in the Diocese of Paterson, serving at St. Patrick Church in Chatham and was incardinated in the Archdiocese of Newark and served at Our Lady of Sorrows Church, South Orange. He was a member of the Newark Archdiocese Ecumenical Commission and was a legal advisor to The Holy See Mission of the United Nations for many years. Dr. McQuade was honored as the Irishman of the Year by the County of Essex, the Seton Hall Law School Irish-American Society and the Newark St. Patrick’s Day Parade Committee in 2014. He is a member of several well-known Irish-American Associations including the Giblin and Cryan Associations. In 2007 Dr. McQuade was the recipient of the Many Are One Alumni Service Award for his commitment to Seton hall University School of Law and Immaculate Conception Seminary School of Theology and Seton Hall University. Frank had numerous affiliation with Seton Hall, he was a graduate of Immaculate Conception Seminary School of Theology, Professor Emeritus of Seton Hall Scholl of Law, Founding Chairman of the Red Mass and former Adjunct Professor of Immaculate Conception Seminary.