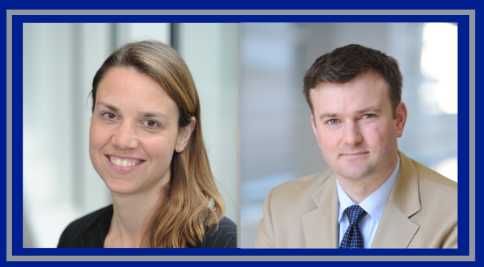 Joining the Law School’s administration this year are Professors Kristen E. Boon and Brian Sheppard, who have been named as associate deans by Dean Kathleen M. Boozang.  “Both are outstanding classroom professors and productive scholars,” said Boozang, “and I know they will bring the same enthusiasm and creativity to their new roles.”

Professor Boon, who joined the Seton Hall Law faculty in 2006, will now serve as Associate Dean for Faculty Research and Development with a mandate to nurture and expand Seton Hall Law’s teaching and scholarship, which is especially important now that the Law School is hiring faculty again. Boon’s subject matter expertise is international law, including the law governing international organizations, international arbitration, transnational law, and international humanitarian law. She is also a popular 1L Contracts teacher. Dean Boon holds a Doctorate in law from Columbia Law School and a J.D. from New York University School of Law. She was awarded an M.A. from McGill University and Sciences Po (Paris), and a B.A. with honors from McGill University.

“Dean Boozang is always thinking down the road about what the next five years will look like,” says Dean Boon. “That makes it an especially exciting time to be at Seton Hall Law, watching our future unfold and working together to advance this great institution.”

Professor Sheppard, who joined the faculty in 2010, was named Associate Dean for JD and Graduate Admissions. He teaches Torts, Professional Responsibility, Entertainment Law, and Lawyering.  His research interests include the intersection of human behavior and computer automation and often draw on the insights of legal philosophy and the methodologies of behavioral psychology. He holds a S.J.D. and LL.M. from Harvard Law School, a J.D. from Boston College Law School, and a B.A. from College of the Holy Cross.

During his time at Seton Hall Law, Dean Sheppard has “come to know and deeply respect the administration, staff, and faculty.” Because they are “such wonderful colleagues, it’s a tremendous honor to be entrusted with my new role as Associate Dean.”