Professor Mark P. Denbeaux: “The Bloomfield Police run an extremely effective border patrol that targets people of color, and they employ discriminatory traffic stops and ticketing to produce a lucrative revenue stream for the Township.”

Newark, NJ -- The Seton Hall Law School Center for Policy & Research has issued a report that analyzed both in-person court appearances and a database of 9,715 tickets in the Township of Bloomfield, New Jersey. The report shows a persistent and disproportionate representation of African Americans and Latinos in the courtroom as compared to their representation in either Bloomfield itself or in the State of New Jersey.

The report, “Racial Profiling: Bloomfield Police and Bloomfield Municipal Court,” details the observations of a team of Seton Hall Law students working for its Center for Policy & Research as Fellows; they focused on race and ethnicity of defendants in Bloomfield’s traffic court over a four-week period in Fall 2015.

“We made two important discoveries,” said Professor Mark P. Denbeaux, Director of the Center for Policy & Research. “The Bloomfield Police run an extremely effective border patrol that targets people of color, and they employ discriminatory traffic stops and ticketing to produce a lucrative revenue stream for the Township.” 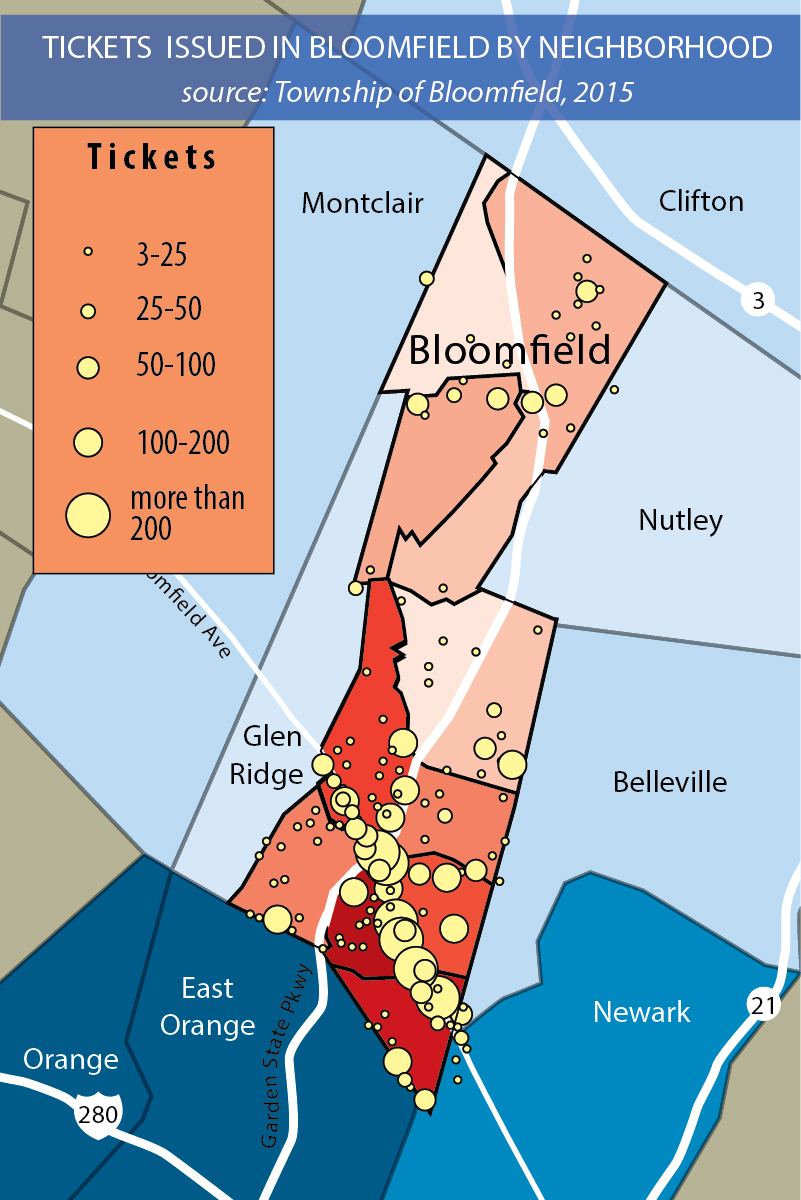 “Our study revealed what essentially amounts to a 'wall' of police action erected against the Newark and East Orange border areas and their predominantly African American and Latino residents,” noted report co-author and Seton Hall Law student Jason Castle '18. “As an African American I wasn’t shocked, but I was disheartened to see the numbers in black and white; as a law student, I was dismayed to see the law being used as a weapon against the people; and as a Councilman from nearby Teaneck, NJ, I was appalled when I researched and compiled the budget, ticket revenue and salary projections for the Township of Bloomfield. Those numbers told a story that I wished I’d never heard.” (Map on left same criteria as above.)

Professor Denbeaux has been active in civil rights and human rights issues throughout his career. “Racial discrimination used to be obvious and life-threatening – ‘the wolf at the door,’” Professor Denbeaux observed. “It sometimes still is, but now it’s more often insidious and corrosive, eating away at both the dignity and quality of life of people of color – it’s the ‘termites in the floor.’"

“When a black man is stopped by the police, both he and the cop know that anything the cop writes on a ticket, or claims to be true, will be upheld by a Traffic Court judge,” Professor Denbeaux concluded. “When that happens repeatedly over a protracted period of time, it takes a toll that you can’t measure in dollars.”

The Center for Policy & Research invites law students nationwide to contact it and replicate the investigation process within their own communities. Professor Denbeaux recalls some of the most important work in the civil rights movement was done by students. “Voter registration may not have been glamorous, but students did it day after day, month after month and it worked,” notes Denbeaux. “Seton Hall students have shown that that can happen today, too. Municipal courts are the ground zero and proving grounds for racial profiling and discrimination today. This is where it all starts. Whether in Ferguson or Bloomfield, it’s predatory, endemic, money hungry and wrong — and it has to stop. Go to the courtrooms and count, and then publish your findings. Then let the town and court give an accounting of its practices — if it can.” To read the report for further findings and methodology, visit law.shu.edu/bloomfieldtraffic.

Seton Hall University School of Law, New Jersey’s only private law school, and a leading Catholic law school in the New York metropolitan area, is dedicated to preparing students for the practice of law through excellence in scholarship and teaching, with a strong focus on clinical education. The Center for Policy and Research enables students to gain practical experience while engaging in research and analysis that promotes respect for the rights of individuals worldwide. The students examine primary sources pertaining to the laws and practices of the U.S. and local government, as well as the reliability of forensic evidence for criminal investigations and prosecution. Seton Hall Law is located in Newark, NJ and offers both day and evening degree programs.