The Last Resort Exoneration Project at Seton Hall University School of Law offers free (pro bono) investigative and legal services to the convicted innocent of New Jersey. Based upon actual exonerations and other data, the most conservative estimate of the factual innocence rate for convictions of serious crimes, put forth by critics of the innocence movement, is approximately 1%. A variety of other studies have suggested a significantly higher innocence rate, ranging from approximately 2% to 5%. One per cent equates to 10 innocents for every 1,000 such persons convicted.

We concentrate on the innocent of New Jersey. At the beginning of 2010 New Jersey’s state prisons held 5,853 inmates who entered the prison system with more than a 15-year sentence up to and including life in prison without parole. At an innocence rate of 1%, that amounts to approximately 58 factually innocent men and women presently languishing behind bars in New Jersey for crimes they simply did not commit. The actual number might reasonably be as high as 300. Whether the actual number is 50 or 100 or 300, we believe that these extreme injustices are more than reason enough to marshal our resources to identify and obtain relief for those who suffer from them. We hope you’ll join us.

Without the benefit of a program dedicated exclusively to the convicted innocent in New Jersey, in the last 15 years, eight innocent people have been exonerated in this state, five of them with DNA evidence:

Numerous other New Jersey convictions have been shown to be profoundly unsatisfactory and unsafe. It is highly likely that many other convicted innocents remain in prison.

The convictions of the innocent in New Jersey have occurred for the same reasons as they have elsewhere —investigative procedures that give rise to a high risk of mistaken identification; police practices that induce false confessions from vulnerable suspects; false “jailhouse snitch” testimony, and so forth. These problems should be prevented with upstream reforms of the criminal justice system. But until that happens, the innocents who have already been convicted should have the best chance possible at exoneration and freedom.

Lesley C. Risinger ‘03 is the Director of the Last Resort Exoneration Project at Seton Hall Law. From 2006 to 2009 she organized and led the team that obtained the exoneration of Fernando Bermudez, who spent 18 years in prison for a murder he did not commit. Mr. Bermudez was declared innocent by New York Supreme Court Justice John Cataldo on November 12, 2009. Ms. Risinger previously assisted her mother, Priscilla Read Chenoweth, a New Jersey attorney, in obtaining the exoneration of Luis Kevin Rojas, who was convicted in 1991 and served 4 ½ years for a murder he did not commit. Mr. Rojas was later found to be actually innocent, and awarded compensation, by the New York Court of Claims.

D. Michael Risinger, John J. Gibbons Professor of Law at Seton Hall Law, is Associate Director. He is a past chair of the Association of American Law Schools (AALS) Section on Civil Procedure, past chair of the AALS Section on Evidence, a life member of the American Law Institute, and was, for 25 years, a member of the New Jersey Supreme Court Committee on Evidence, which was responsible for the current version of the New Jersey Rules of Evidence. He is author of works on a diverse range of subjects, including many articles on expert evidence issues and on the problem of the convicted innocent. He also served as co-counsel in the Fernando Bermudez case.

Applications - How to Apply?

We invite inmates to file with us applications seeking review of their claims of actual factual innocence. All applicants are subjected to rigorous screening. The most important screening criteria are a plausible and substantial claim of actual innocence, and the applicant’s willingness to cooperate with our requests aimed at discovering the truth.

If an applicant appears to us to have a legitimate basis for claiming that he or she is factually innocent, we will undertake an independent review of the facts of the case and all surrounding circumstances. We will then decide whether further investigation is necessary before we make a final decision about whether or not to take the case in any capacity, what our role in the case will be, and the conditions under which we will agree to proceed.

Applicants should write to: 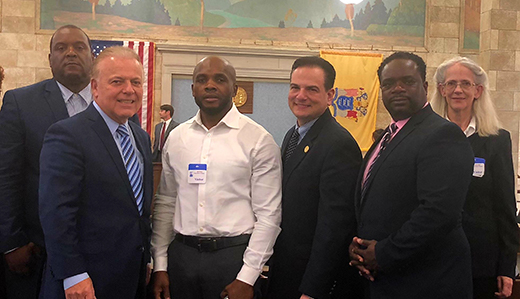 The Senate Judiciary Committee has passed bipartisan legislation sponsored by Senator Joe Pennacchio and Senator Shirley Turner to create a commission that would develop reforms and aid those who have been wrongfully convicted in New Jersey. Lesley Risinger, Director of The Last Resort Exoneration Project at Seton Hall Law, advocated at a committee hearing on October 29th. Read More >> 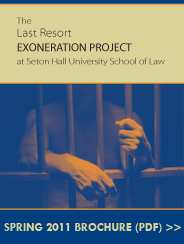