The following organizations provide valuable information and networking and mentoring opportunities for students of diverse backgrounds. Many host conferences and job fairs and provide mentorship and scholarship opportunities. You should visit their respective websites often and consider becoming a member. The membership fee is usually waived for students.

American Bar Association, Commission on Racial and Ethnic Diversity in the Profession

American Bar Association, Commission on Women in the Profession

American Bar Association, Council for Racial and Ethnic Diversity in the Education Pipeline

Many organizations have published studies, reports, and articles examining the issues faced by individuals of diverse backgrounds in the legal profession and how individuals and institutions address these challenges. The list below provides a sampling of these resources.

Is Anybody Listening? Does Anybody Care? Lack of Diversity in the Legal Profession, The Federal Lawyer (June 2015).

The Diversity Crisis: What's Wrong With This Picture?, The American Lawyer (May 29, 2014).

IILP Review 2012: The State of Diversity and Inclusion in the Legal  Profession.

IILP Review 2011: The State of Diversity and Inclusion in the Legal Profession.

ABA Presidential Diversity Initiative, Diversity in the Legal Profession: The Next Steps (April 2010).

Hispanic National Bar Association Commission on the Status of Latinas in  the Legal Profession: A Study on the Latina Attorneys in the Public Interest Sector (September 2010).

ABA Commission on Mental and Physical Disability Law, The Second National Conference on the Employment of Lawyers with Disabilities: A Report from the American Bar Association to the Legal Profession (June 2009).

ABA Commission on Women in the Profession, From Visible Invisibility to Visibly Successful: Success Strategies for Law Firms and Women of Color in Law Firms (2008).

ABA Commission on Women in the Profession, Visible Invisibility:  Women of Color in Law Firms (2012).

ABA Presidential Advisory Council on Diversity in the Profession, Collaborating to Expand the Pipeline (2006).

Minority Corporate Counsel Association, An Examination of the Professional Experiences and Challenges Faced by Attorneys with Disabilities Who Work at Large Firms (2009).

New York City Bar Committee on Women in the Profession, Best Practices for the Hiring, Training, Retention, and Advancement of Women Attorneys (February 2006).

The Honorable Joseph A. Greenaway Highlights the Importance of Diversity in Supreme Court Nominations

The judge used this year’s Diversity Speaks event to analyze the public response to the nomination of the Honorable Ketanji Brown Jackson and carefully explained the flawed assumptions of commentators’ critiques calling into question her qualifications for the position after President Biden promised during his campaign to nominate a black woman to the Court. Read more. 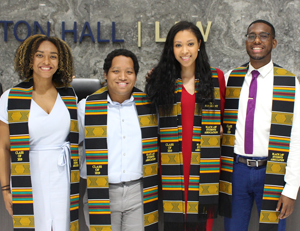 Congratulations to our students!