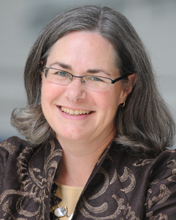 
Professor St. Romain earned her J.D., cum laude, from Harvard Law School, and a B.A. with highest honors from the University of California, Davis. She clerked for the Honorable Anne E. Thompson in the United States District Court for the District of New Jersey. Prior to coming to the Center for Social Justice in 1998, Professor St. Romain litigated for twelve years at Hudson County Legal Services Corp., representing indigent individuals in trial and appellate courts with regard to issues of housing, domestic violence, and family law. Prof. St. Romain served as the Chairperson of the District VI Ethics Committee and has a been appointed by the New Jersey Supreme Court to sit as a Special Master at ethics hearings. Professor St. Romain is an Clinical Associate Professor in the Family Law Clinic at the Center for Social Justice. She has also taught Family Law, Marriage, and Divorce, and Gender and the Law.