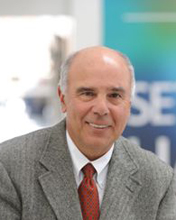 
Ronald J. Riccio received his B.A. degree cum laude from Seton Hall University in 1968 and Juris Doctorate degree from Seton Hall University School of Law in 1971, where he was a member of the school’s first public Law Review. Following a judicial clerkship with The Honorable Lawrence A. Whipple, United States District Court Judge, he began a sixteen year career in private practice as a litigator, during which time he successfully represented plaintiffs and defendants in a number of major trial and appellate matters. He returned to his alma mater in 1988 when he was appointed Dean of Seton Hall University School of Law. He successfully served as Dean for eleven years, during which time he also taught Civil Procedure and Constitutional Law.

He was named as Newark's 2015 Appellate Practice "Lawyer of the Year".  He was honored as Seton Hall Law's 2016 Distinguished Graduate, received the 2016 Saiber Professional Achievement Award, and was chosen by the New Jersey Law Journal as the 2016 Attorney of the Year.

As a Professor of Law at Seton Hall Law School, Dean Emeritus Riccio has taught Constitutional Law, Comparative Constitutional Law, Civil Procedure, Business Associations, and Introduction to Lawyering. He has been voted Professor of the Year five times by the student body and is a past recipient of the Andrea Catania Fellowship for Excellence In Teaching. He has been a lecturer for the New Jersey Law Journal’s annual review of New Jersey Civil Law

Establishing the Delicate Balance between Liberty and Security: An Involved People Has Been the Essence of American Democracy from Its Founding and Is Needed As Much Now As Ever, 170 N.J.L.J. 200 (2002)