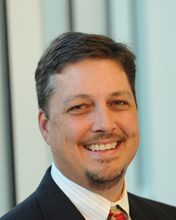 Professor Opderbeck is also interested in the relationship between law, theology and science. He recently completed a Ph.D. in Systematic and Philosophical Theology at the University of Nottingham, where his thesis offered a theological appraisal of the emerging discipline of “neurolaw.” Prior to his academic career, David was a Partner in the Intellectual Property / Information Technology practice at McCarter & English, LLP.

Professor Opderbeck maintains a website relating to his work at http://www.davidopderbeck.com. He also, blogs at thecybersecuritylawyer.com and can be found on Twitter at @cyberseclawyer.

The Skeleton in the Hard Drive: Encryption and the Fifth Amendment, 69 Fla. L. Rev. 883 (2018) (Examines Fifth Amendment right against self-incrimination as applied to decryption keys and related passwords.)

Lex Machina Non Est: A Response to Mark Lemley's "Faith-Based Intellectual Property", 55 U. Louisville L. Rev. 219 (2017) (Argues for the application of religious and other ethical norms to intellectual property theory.)

Towards a Theology of Intellectual Property as Social Relations, 10 St. Thomas L.J. 738 Symposium (2014)

A Virtue Ethics Approach to the Biotechnology Commons (or, The Virtuous Penguin), 59 Maine Law Rev. 316 Symposium (2007)

The Penguin’s Genome, or Coase and Open Source Biotechnology, 18 Harvard Journal of Law and Technology 168 (2004)

Apple v. FBI:, Brief in Support of Neither Party, with Prof. Justin (Gus) Hurwitz (2016 (submitted but not filed))